Lithuanian Culture Institute presents a new issue of the cultural magazine * as a Journal, that deals with the subject of space. The recently published Cosmos as a Journal was compiled by an artist, the founder of the Lithuanian Space Agency, and the author of the Lithuanian National Pavilion at the 2021 Venice Architecture Biennale Julijonas Urbonas. Co-authors of this issue have become 18 artists, researchers, curators and journalists from Lithuania, the USA, France and Germany. Their articles and creative works will soon reach more than 200 cultural professionals around the world, while the meeting of the magazine’s creators with the Lithuanian readership is scheduled for 3 March 2022 at MO Museum in Vilnius.

The second issue of the international magazine

“Today, we are launching into the Earth’s cultural space the second issue of * as a Journal, which enables a creative dialogue between Lithuanian, as well as foreign artists and scientists, as the theme of cosmos conceptually unites Kazimieras Simonavičius’ dragons, Mikalojus Konstantinas Čiurlionis’ Rex and Julijonas Urbonas Planet of People,” says Aušrinė Žilinskienė, the director of the Institute, adding that the new issue will be of equal interest to readers with little preexisting interest in outer space and enthusiasts of all things extraterrestrial. “The visionary Elon Musk should like it – we will definitely send him a copy.” 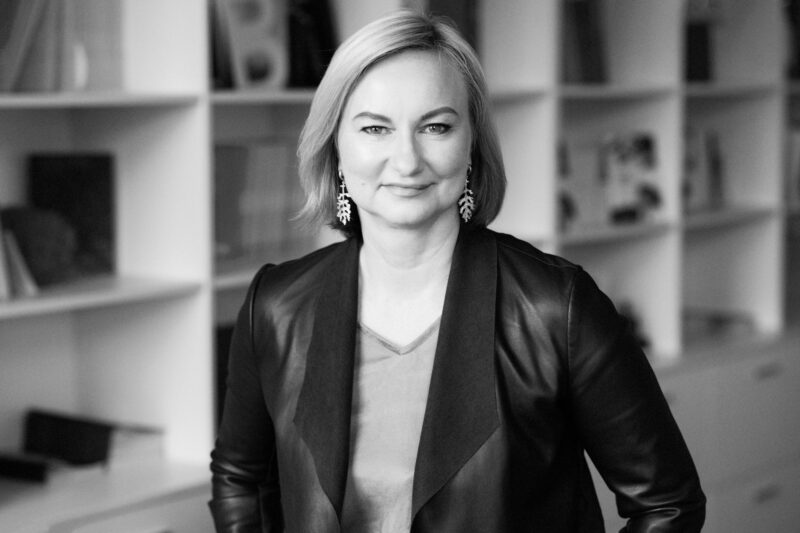 The content of each issue of * as a Journal is painstakingly put together by guest compilers working together with the editor of the magazine, Kotryna Lingienė. The title of each issue will change according to the topic, which will be suggested by the editorial board.

Julijonas Urbonas: a unique Cosmos as a Magazine community emerged

Julijonas Urbonas, the compiler of Cosmos as a Journal, first became interested in space as a source of inspiration 15 years ago while studying at the Royal College of Art in London. Having started exploring alternative gravity, he soon became a member of the space art community: he began collaborating with scientists and participating in various space art exhibitions and festivals. “After returning to Lithuania and discovering there the lack of such art and cosmic imagination in general, I established the Lithuanian Space Agency, an organisation of extraterrestrial culture,” says Urbonas. 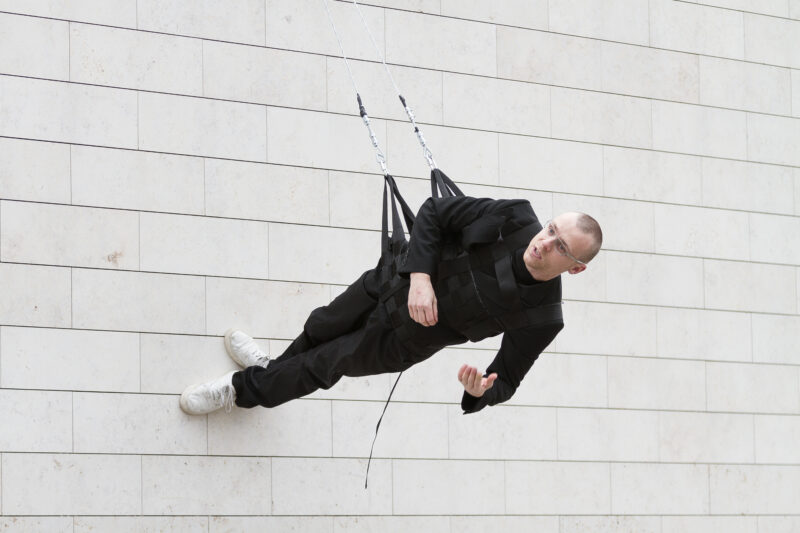 The artist admits that, while compiling the magazine, he became acquainted not only with niche experts, from astroanthropologists to space culinary experts but also with a wide variety of concepts of space. “I realised that each of us – a space artist, a composer of extraterrestrial music, a choreographer working with the state of weightlessness, a writer of cosmic fiction – create different yet similar cosmologies,” says Urbonas, adding that working on the magazine allowed him to rediscovered a unique history of Lithuanian space culture. “For example, I now see Kazimieras Simonavičius as a unique fantasist of pyrotechnic vehicles.”

More authors have contributed to the creation of this issue than are listed in the contents. “Many of those who were not mentioned contributed with advice or links to other authors. This has created a unique Cosmos as a Journal community, new connections and even potential collaborations. “Recently, one of the authors directed Arte TV producers to come to Vilnius to film an episode about space culture.”

Space culture and space in culture

In the issue, Urbonas tells readers about the Lithuanian Space Agency and his project Planet of People presented at the Venice Architecture Biennale, and also talks with the composer and sound artist Gailė Griciūtė about the creation of the opera-installation of unearthly sounds Honey, Moon! Daniel Gilfillan, a professor at the Arizona State University and a researcher of the world of the future, ponders the sounds of space and invites the readers to listen to a singing comet. Philosopher, author of articles aiming to popularise science Daniel Oberhaus shares his ideas on extraterrestrial communication: if another civilization attempts to get in touch with us, will we understand? 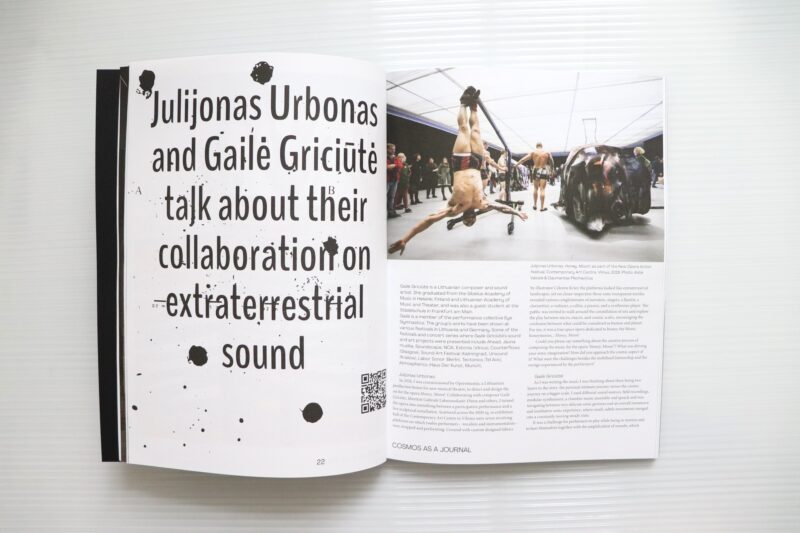 Science journalist Goda Raibytė and photographer Visvaldas Morkevičius present an interview with astrobotanist Danguolė Švegždienė, who, together with her team, was the first in the world to grow a plant, the thale cress, from seed to seed. “I look at the night sky and think about what is going on there,” shares the scientist. Meanwhile, Radvilė Racėnaitė, an ethnologist and researcher of Lithuanian folklore, Baltic religion and mythology, looks up into space from the perspective of Lithuanian mythology. 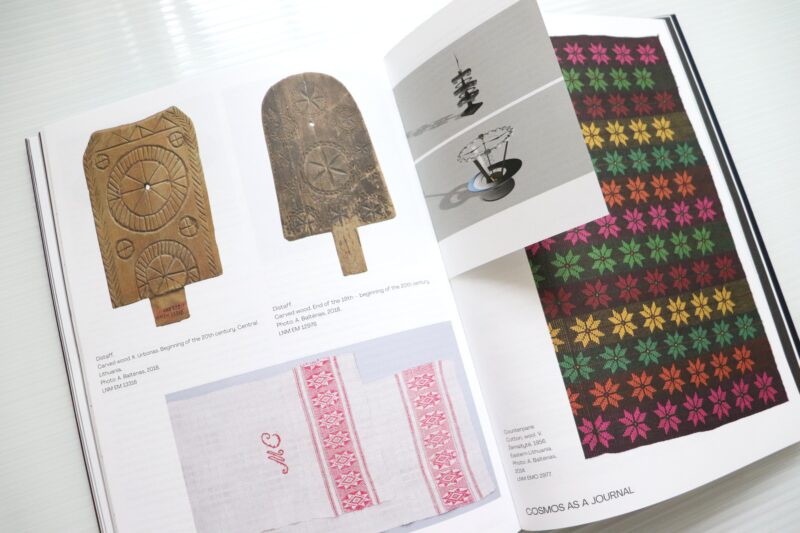 Various facets of space culture are complemented in the issue by reproductions of works by Audrius Bučas and Valdas Ozarinskas, M. K. Čiurlionis, Aleksandras Griškevičius, Pakui Hardware, K. Simonavičius and other artists, as well as 8 cosmic works of art.

Lovers of science fiction will, too, find something to read in Cosmos as a Journal. The issue includes as essay Otherworldly Journeys by Nahum, a Mexican artist in Berlin and founder of the KOSMICA Institute, awarded the Young Space Leader and Karman Fellowship for cultural contributions to astronautics and space exploration in 2014. Architect, urban planner Fred Scharmen shares his piece of astronomical-biographical fiction, Whale Space, or, The Killers in Eden, specially written for * as a Journal. According to the author, most of the strange events he describes really did occur. 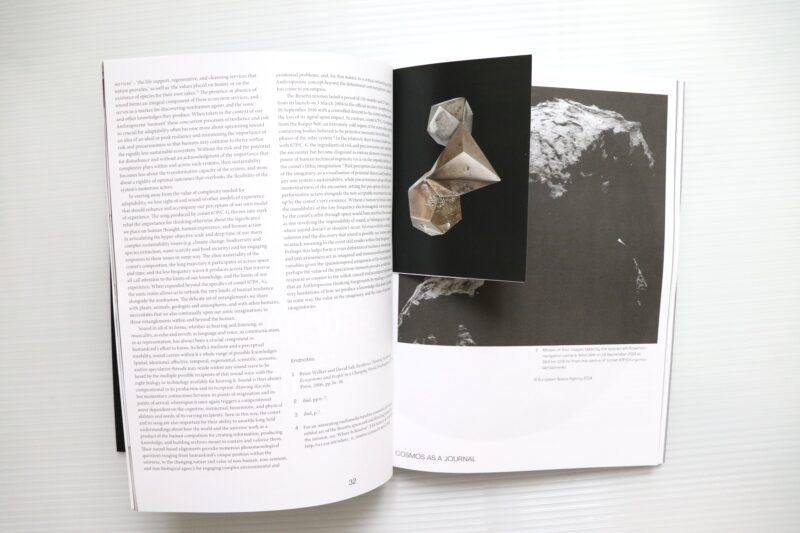 Jane Levi, a food historian and researcher of utopias at the Royal College of Art in London, looks at the evolution and culture of eating in space. Meanwhile, anthropologist Claire Isabel Webb, who researches the history of the search for extraterrestrial life at the University of Southern California, talks about how the smells associated with the cosmos affect how we imagine outer space. Her article is supplemented by an unexpected gift for readers – a sample of the scent of space created by an artist and contemporary art curator Milda Dainovskytė. 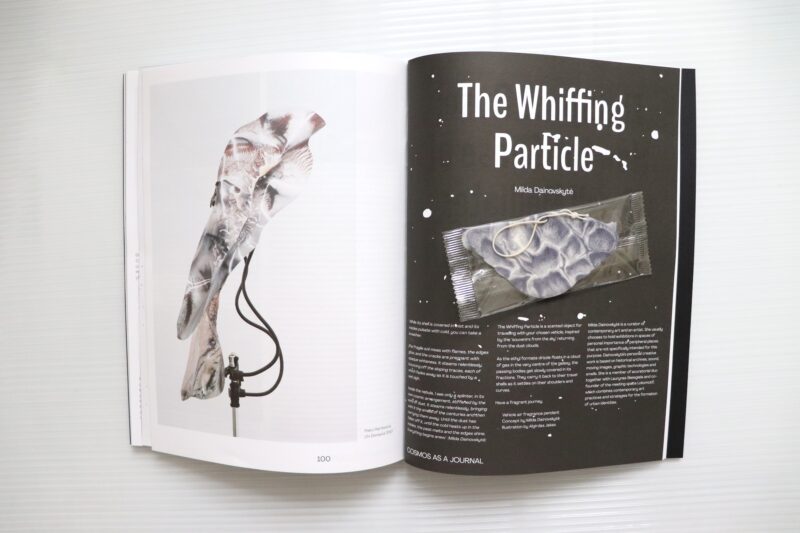 How does space smell?

Milda Dainovskytė composed her scented object, The Whiffing Particle, inspired by “souvenirs from the sky” – meteorites. “I was surprised by the curious fact that the Ethyl formate molecule found in the centre of the galaxy is partly responsible for the flavour of raspberry. It is a very earthy smell, and yet its particle can be found in the most unexpected place – the Milky Way,” says Dainovskytė. 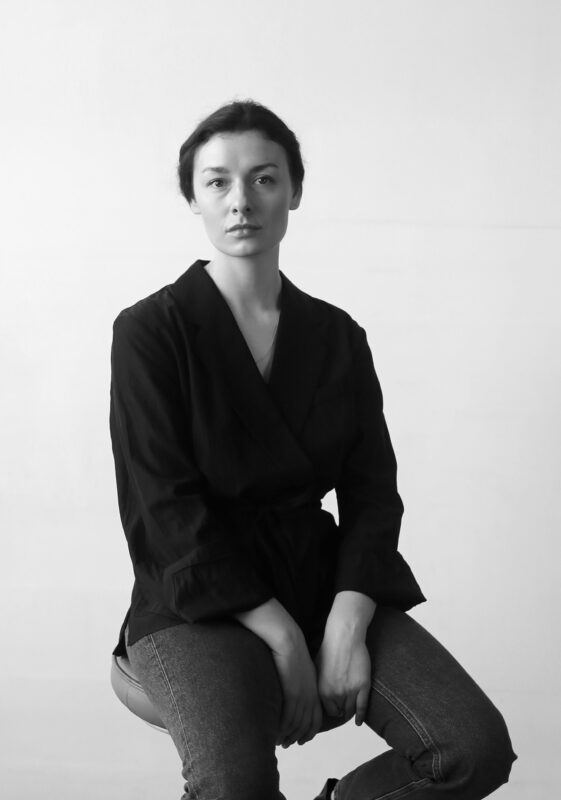 The Whiffing Particle was realised together with the Hamburg-based artist Lithuanian Algirdas Jakas, who drew a meteorite resembling the 19th-century illustrations of scientific discoveries, carrying a raspberry scent. “I am fascinated by the publications about celestial bodies from that period, especially the visualisation of space, and the relationship of ‘earthlings’ with unfamiliar phenomena that have been demonised or, conversely, deified,” shares the creator of the scent. 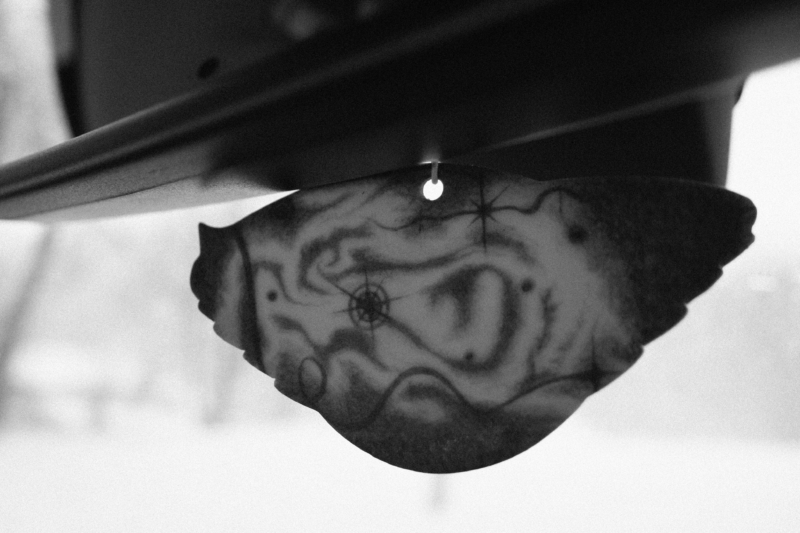 A shining dragon in infinite space

The design of the issue was created by Gailė Pranckūnaitė, who was fascinated by the idea of infinite space, darkness, and visible and invisible particles scattered in it. “I wanted the magazine’s general vibe to be a little cold yet dynamic. The introductory page of each article depicts different particle configurations in space, while the cover features an illustration of Kazimieras Simonavičius’ dragon, screen printed in white on black paper, which gives the publication an almost tangible, organic texture,” says the designer. 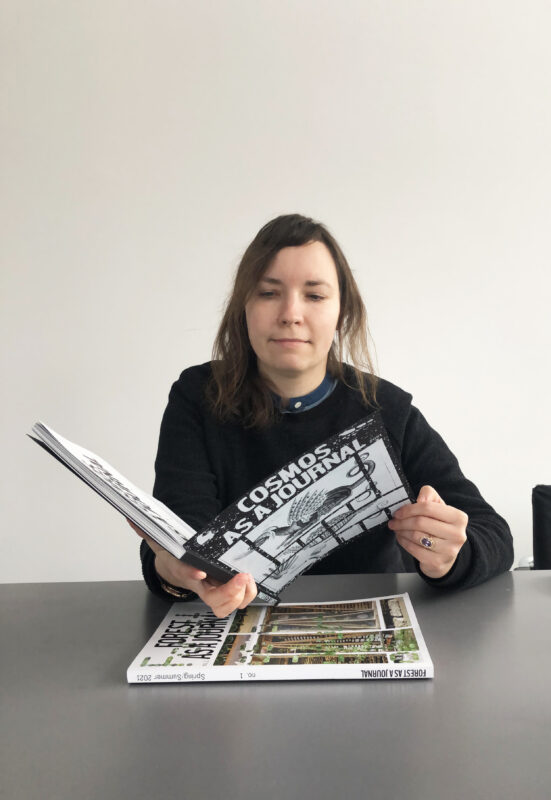 Save the date for the launch of the issue!

The launch of Cosmos as a Journal issue is scheduled to take place on 3 March at MO Museum. The editor of the magazine Kotryna Lingienė, the compiler of the issue Julijonas Urbonas, one of the personalities featured in the magazine, astrobotanist Danguolė Švegždienė, the creator of the scent of space Milda Dainovskytė, and Ignė Alėbaitė, the coordinator of the magazine’s publishing at the Lithuanian Culture Institute, will take part in the discussion, which will be moderated by a journalist and one of the magazine’s co-authors Goda Raibytė.

There are also plans in place to launch the website of the magazine * as a Journal, www.asajournal.lt, soon, where it will be possible to access articles published in the magazine’s various issues, purchase the latest issue and download free digital copies of previous issues. 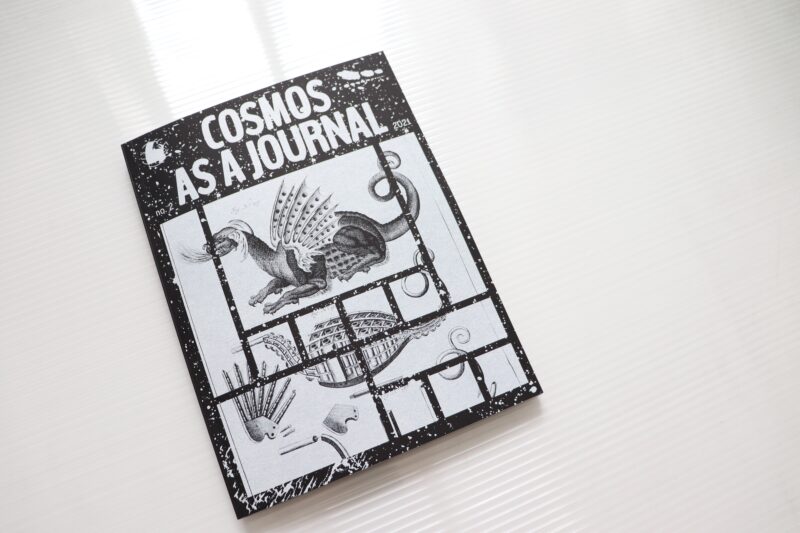 Cosmos as a Journal, which is the latest issue, and Forest as a Journal, the issue published in summer 2021, are available at the MO Museum’s gift shop. The magazine is also sold in Germany at the bookstore of the Haus der Kunst Museum in Munich, and in France by the online bookstore After 8 Books. The distribution network in Europe will continue expanding.