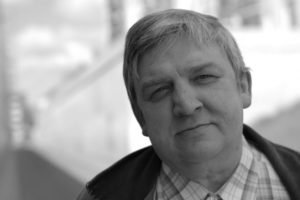 Gendrutis Morkūnas (1960-2009) was a highly qualified nuclear safety specialist for most of his life. However, all of a sudden in 2005, he published a book for children, a humorous story about a strange animal that is half-dog and half-cat. The book was an instant success, it won major children’s literature prizes, and announced the beginning of a new career. Although his career was cut short by his untimely death, it was still very prolific. In his few years as a writer, Morkūnas published five books for children and young adults, and two essay collections for grown-ups were published posthumously. He had a crystal-clear and witty style, he tried his hand at quite different genres and themes, and most importantly, he was described unanimously as an extremely ethical writer. His stories teach us quite clearly about right and wrong, and they have all the compassion that more moralising storytellers sometimes lack.

Morkūnas’ last book has a strange title. “Nuomšikas” is not even in the dictionary. It refers to a child who can be lent out. Basically, children from children’s homes are sent to work for money, which they do not see, as it all goes to the children’s home to pay for their upkeep. It is the idea of the Experimental Home, in which the children are ‘prepared for life’. Naturally, the story contains quite a lot of sad and even tragic moments, but it also has a lot of humour, adventure, kindness, and of course a happy ending. It teaches children about important things: having and not having a family, belonging, and finding your own way in the world. The book was voted Book of the Year for adolescents, and won the IBBY award.