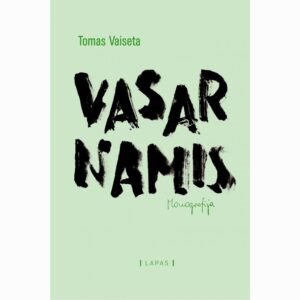 Even though Soviet psychiatry is still held ransom by the myths about it, Tomas Vaiseta dares to seek the truth, researching the social history of a particular psychiatric hospital through the lens of the Soviet model of psychiatry. For the inhabitants of Vilnius and most Lithuanians for that matter, the house number 5 on Summer Street is synonymous with a “madhouse”. For almost one hundred years it has been home to the Vilnius Psychiatric Hospital, the most important psychiatric institution in Lithuania during the years of the Soviet occupation between 1944 and 1990. Starting off with the address that became a sociocultural stigma and a metaphor, the historian Tomas Vaiseta invites us to step inside and learn not only about the local history of the hospital, but also about the entire model of Soviet psychiatry. Vaiseta’s research is unique because never before in the books about Lithuanian Soviet psychiatry have we heard the accounts of former inpatients and medical personnel.

Tomas Vaiseta is a historian, writer and associate professor of History at Vilnius University. He is the author of fiction books “Paukščių miegas” (The Sleep of Birds, 2014), “Orfėjas, kelionė pirmyn ir atgal” (Orpheus: A Journey There and Back, 2016), as well as monographs covering the Soviet era: “Nuobodulio visuomenė” (The Society of Boredom: Ideology and the Mundane in the Late Soviet period, 1964–1984, 2014) and “Vasarnamis” (Summerhouse: The Social History of Vilnius Psychiatric Hospital, 1944–1990, 2018).