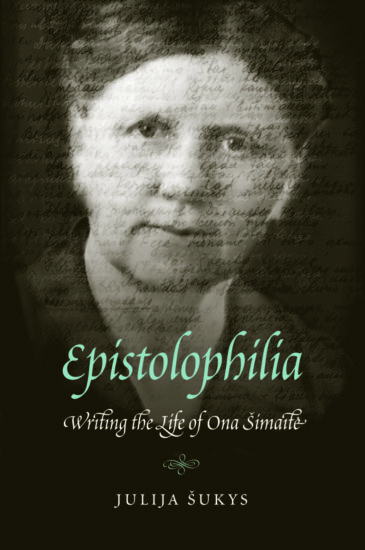 Written by Canadian-Lithuanian author Julija Šukys, Epistolophilia, published in 2012, brought back to collective memory the life story of Ona Šimaitė which is inextricably linked to the Holocaust, to the pain of history, to unbearable emotional burden, and a brave human attitude, unfaltering nder any circumstances. Šimaitė was a librarian who worked in the Library of the University of Vilnius during the Second World War. When the Nazis established the Vilna Ghetto in September 1941, she became one of the most important liaisons between the Ghetto and the outside world, as well as between the Ghettos of Vilnius and Kaunas. Šimaitė is often deservedly called the most famous rescuer of the Vilnius Ghetto Jews. From the first days of the German occupation, she began helping her Jewish friends in all the ways she could conceive of – by hiding Jewish cultural valuables, historical and literary heritage, gathering information, transmitting messages, and becoming a loyal messenger. Eight days after the Vilna Ghetto was established, Šimaitė visited it with the official task of “collecting unreturned library books”. Her visits gradually became not only an indispensable help, but also an effort to rescue and safely hide Jewish children. The librarian carried out her humane mission until 1944 when the Gestapo tracked her down and, after long days of torture, sent her to the Dachau camp. When the War ended, Šimaitė did not return to Lithuania but lived in Paris and Israel. In 1966, she was awarded the title of Righteous Among the Nations.

Julija Šukys constructs her story about Šimaitė’s life with a sensitive, caring, and loving look from one woman to another. With the help of Šimaitė’s archive, scattered around the world, and a huge array of letters, she gracefully – combining the researcher’s gaze and the subtly gripping tone of her narrative – allows the reader to follow the life of a librarian in war-torn Vilnius, post-war Paris, and Israel, starting a new page of its history. Šimaitė was an experienced letter writer, as evidenced both by the title of the book and by the stories from Šimaitė’s life, her love and respect to her addressees – all of which entered the book in the form of extensive quotations from her letters. An exploration of Šimaitė’s textual legacy – including not only her letters but also her diaries and other written texts – shows us her fate in the face of the grand history, and at the same time reminds us of her motto for life: “you should devote every day of your life to the good of others by doing everything you can; by actions, not by idle talk.”

Winner of the 2013 Helen and Stan Vine Canadian Jewish Book Award for Holocaust Literature. Shortlisted for the 2012 Mavis Gallant Prize for Non–fiction. Longlisted for the 2012 Charles Taylor Prize in Literary Nonfiction. Named one of the Best Books of 2012 by Maisonneuve Magazine.

Julija Šukys – writer and lecturer, born in Canada to a Lithuanian family. In 2001, she graduated from the University of Toronto with a doctorate in comparative literature. Author of articles and essays on literature, exile, the Holocaust, emigrant identity, women writers. Šukys’ first book Silence is Death: The Life and Work of Tahar Djaout was published in 2007. In 2013, her book Epistolophilia. Writing the Life of Ona Šimaitė about Ona Šimaitė, Righteous Among the Nations, was awarded the Canadian Literary Prize for books about the Holocaust. Šukys currently teaches creative writing (documentary literature) at the University of Missouri.