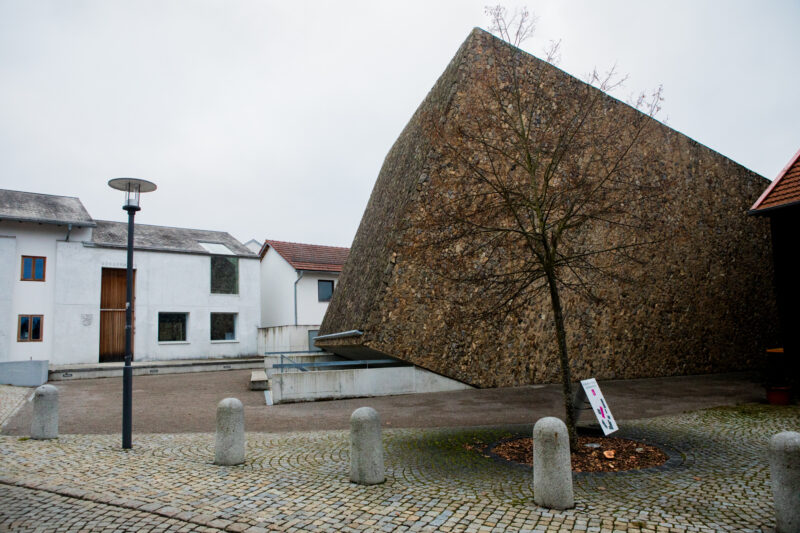 “You are a real gift to us!” Last weekend, many participants of the final events of the Lithuanian cultural season in Bavaria at the Blaibach Culture Hall heard such an open expression of admiration from the audience. Reluctant to say goodbye, the audience gave a standing ovation to the contemporary music ensemble Synaesthesis and composer Žibuoklė Martinaitytė, persuaded the chamber choir Aidija, as well as the accordion virtuoso Martynas Levickis for an encore and chatted to the photographer Gintaras Česonis by his “portraits” of ancient tree roots and tops at his exhibition Ancient Woods displayed in the lobby.

The open, attentive and somewhat unexpectedly emotional German audience (both art lovers from the surrounding towns of Eastern Bavaria and those who travelled several hundred kilometres to come to Blaibach) did not let the news that restrictions  are to be tightened in this (and many other) German states imminently, which will strongly affect cultural events, scare them. Due to the fact that event spaces will only be able to accommodate 25 per cent of its capacity and the audience will have to provide proof of both vaccination (or that they had Covid) and an additional test, the Blaibach Concert Hall, too, is likely to close until better times.

Lithuanian culture season Without Distance: Lithuanian Culture in Bavaria 2021, which started from organisational uncertainty during the first wave of the pandemic, its first concert by the Bavarian Radio Symphony Orchestra conducted by Mirga Gražinytė-Tyla played in an audienceless hall and broadcast on the radio, gradually gained momentum and later welcomed live audiences to its programme of concerts, performances, and jazz, literature and fine art events, closed to the fanfare of the events of the final weekend as the country was closing again for a while. “The restrictions have no power over the partnerships between Lithuanian and German artists and institutions established during this project or on the future creative collaborations. That is the main purpose of presenting Lithuanian culture,” said Aušrinė Žilinskienė, the director of the Lithuanian Culture Institute.

Why Bavaria? Why in Blaibach?

On the edge of Bavaria, the determination of Thomas E. Bauer, the founder of the Blaibach Concert Hall, to build a venue of contemporary architecture in a small town little-known even to people in Bavaria, and the courage of Lithuanians to organise a cultural season where Lithuanian contemporary art has reached only sporadically, truly came together in a harmony not far from musical. “Why in Bavaria?” The organisers of the series of Lithuanian events often answered this question raised in equal proportion by their German partners and the Lithuanian artists participating in the season with the simple “But why not?”. On a more serious note, it became an opportunity to talk about the modern meaning of historical connections between the two cultures (dating back to the Middle Ages), the challenge of building bridges between artists and institutions in as yet unexplored areas of cooperation, the relativity of distances and the joy of discovering similarities.

“Why in Blaibach?” The founder of the concert hall has been answering this question since the times when, before the construction, he was trying to convince the city authorities (in various ways) that a new cultural space was needed here no less than, say, a swimming pool. “I always say that our goal is not to educate the locals,” said Bauer, not afraid to come across as not especially diplomatic. “We are creating new infrastructures here: concerts attract people from other places, often from quite far, they stay in hotels, go to restaurants and so on. I was trying to convince the city authorities that such activities will have long-term benefits for the whole region, and the results are already visible,” said Bauer, who is also a vocalist, opera soloist and music professor. It took this visionary incredible energy (as well as impressive ingenuity and compromise) for this concert hall to emerge in the middle of Blaibach in 2014, of which the locals had already become proud. In front of the hall, there stands a sort of a tribute to the town: a newly built eldership building.

A cube that appears to be inserted into the ground, covered with slabs of granite blown up in the local mountains and on the inside, a combination of recycled glass and concrete, which has excellent acoustic properties, stands next to the 500-year-old Bavarian “hut” restored by Peter Haimerl, the same architect from Munich. This unique space that has been resurrected from the ruins is open not only to artists performing in the concert hall but also to anyone who wants to look around or have a coffee.

1535 km: this is the distance between Vilnius and Munich. 195 km: this is the distance that separates the Bavarian capital from the small town of Blaibach located in the east of the state, close to the border with the Czech Republic, in the hills covered with ancient forests. Around 600 km: this is how far a couple from Cologne, who had never been to Blaibach before, drove to attend an event. It was the husband’s idea of a birthday present for his wife. Neither of them was familiar with Lithuanian art before, although they know Mirga Gražinytė-Tyla’s name well. Fascinated by the diversity of the closing programme of the Lithuanian culture season and its highest artistic quality, they intend to study the repertoires of Lithuanian concert halls and theatres. “You came up with a good idea – Ohne Distanz – Without distance. It really is much smaller than it seems to us,” joked the new fans of Lithuanian art.

18 km: (at least) this distance was covered by the photographer Gintaras Česonis in the forests surrounding Blaibach walking through its mists and over the trees that had fallen on the paths, who attended the closing of the Lithuanian cultural season (and the opening of his exhibition). While on an artists’ residency in Blaibach in the summer, he walked no lesser distances every day trying to imagine the forest that once continuously stretched from Bavaria to Lithuania. After a lengthy break dedicated to curating and organisational activities, working on the cycle Ancient Woods inspired Česonis to pick up the camera again. His works printed on aluminium sheets exhibited in the lobby of the Blaibach Concert Hall seem to glow from the inside and best come to expression when the main lighting of the lobby is switched off, as the audience had a chance to see after the concerts.

From a depth of around 6 km begins the hadal zone, the deepest and darkest region of the ocean, into which the composer Žibuoklė Martinaitytė and the contemporary music ensemble Synaesthesis invited the audiences to delve. The audience of the Blaibach Concert Hall became the “pioneers” of this expedition of music and light, being the first to hear (or rather, experience or live) a journey filled with sound, visual and even pressure sensations from the surface into the challenging depth, where the memory of light lives nonetheless. The lighting design of The Hadal Zone (ABLight by Arvydas Buinauskas) reinforced the impression that the vaults of Blaibach Concert Hall were specially created for this piece by Žibuoklė Martinaitytė (it is no coincidence that the composer wrote a part of this work while on an artists’ residency in Blaibach in the summer).

Innumerable is how many encores the chamber choir Aidija would have had if the director Romualdas Gražinis had not finally led the choir, still singing Motherland Fern by Bronius Kutavičius, out the door. The programme delivered by Aidija, which Gražinis delicately weaved from both German and Lithuanian musical pieces that complement, or “echo”, each other both musically and conceptually, left an impression of an unexpectedly intimate, unforgettable conversation between people who had just met. 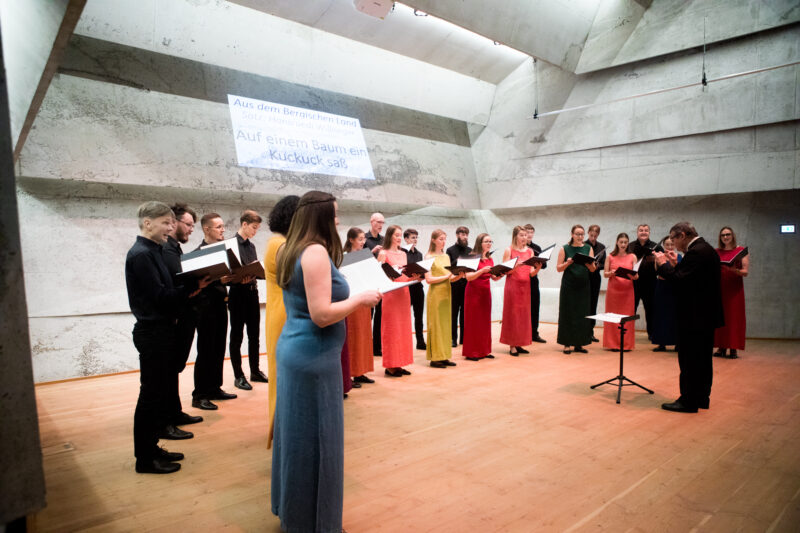 And finally, 400 km: this is the distance that the accordion “whisperer” Martynas Levickis had to travel after his morning concert in Blaibach, as he had to rush to the evening performance in Mainz with the Deutsche Staatsphilharmonie orchestra. The musician had prepared a very personal programme for the final concert of the weekend of Lithuanian culture that closed the Lithuanian cultural season in Bavaria. Through the pieces he performed, Levickis told about his friendship with the instrument, the special characteristics and possibilities of which he demonstrated playing works “stolen” from other instruments or specially created for it, about his childhood and Lithuanian folk songs that he learned (and later “overlearned”, forgot and then revisited to give them new meaning), about liberating technique and bold emotion. 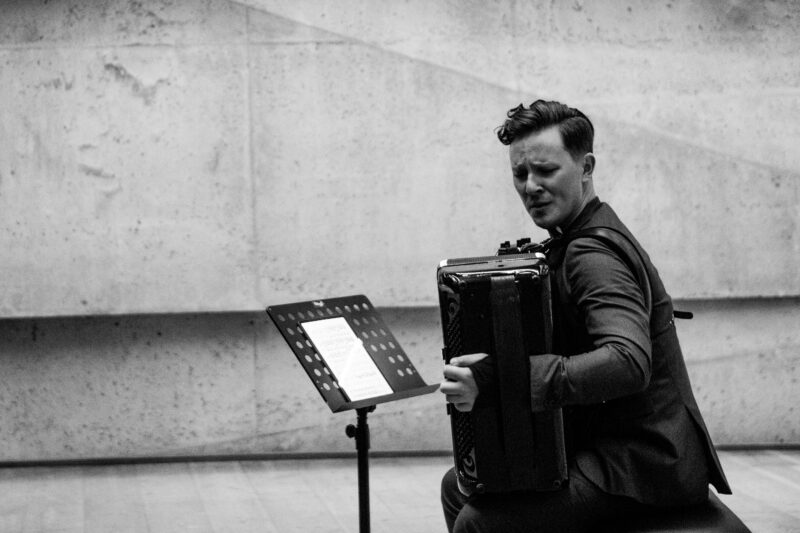