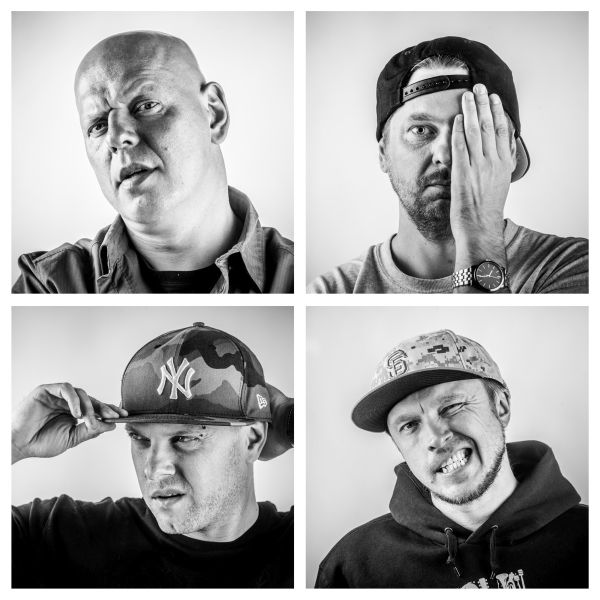 If for some reason you find yourself in the middle of a sweaty crowd at a music festival in Lithuania, there is a chance you will be mightily surprised. First of all, G & G Sindikatas are often headliners, placed above visiting big-name foreign artists. It takes ten minutes of the band’s act to understand their appeal. The energy is simply irresistible. Dubbed ‘the godfathers of the Lithuanian hip hop scene’, G & G Sindikatas have had an influence on Lithuanian rap that is so huge it would take the combined efforts of Eminem, Jay-Z, Public Enemy and Snoop Dogg to match it. Moreover, the group’s popularity crossed over from hip hop to mainstream long ago. Club owners and festival promoters treat these rappers with the utmost respect, as the band’s shows are always guaranteed to draw big crowds.

The group’s leader Svaras started experimenting with hip hop sounds back in 1996. The first album on CD-R was released by a small independent label three years later. By 2001, the media had caught up with the band’s growing fan base. It would be fair to say that G & G Sindikatas single-handedly kickstarted Lithuania’s hip hop movement. During the next couple of years, dozens of hip hop acts found their way into the limelight.

With seven albums under their belt, the band has been playing in Lithuania and abroad for the best part of the last 20 years. Although all of their material is performed in Lithuanian, crowds in Poland, Great Britain and Ireland include not only emigrés but also local hip hop fans intrigued by the group’s sound. In 2011, G & G Sindikatas won the honour of recording the theme tune for Lithuania’s biggest-ever historical action film, and it came with an invitation to perform cameos in the movie itself, yet more proof of the group’s popularity. Another highlight came in 2016, when the band performed a series of three unplugged gigs with an orchestra of the best Lithuanian musicians assembled for this particular ocassion. In 2017, G & G Sindikatas performed both in the biggest arena in Vilnius and on Cathedral Square, attracting thousands of fans. It does not get any bigger than that in Lithuania, but with a new arena tour announced for 2018, and a new album on the cards, these hip hop heroes show no sign of scaling down their operation