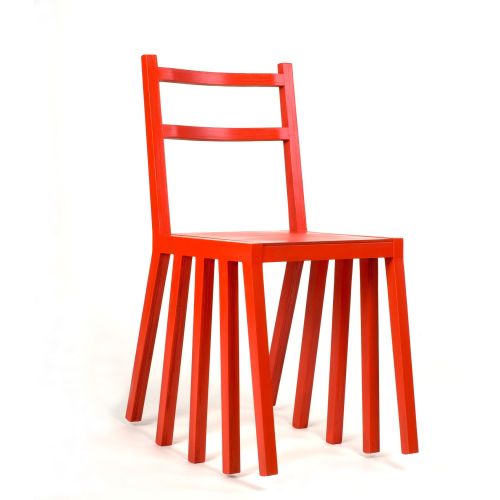 A ten-legged rocking chair that has become the face of Lithuanian design – that’s one of the best known of all contemporary Lithuanian design objects. It is this item of furniture that made Paulius Vitkauskas (1982), a young designer at the time, best known. He designed it for a year project while studying in the Department of Design at the Vilnius Academy of Arts. In 2006, the Vilnius furniture exhibition Baldai featured the first design competition Neformate; its theme was ‘National Benefits of Sitting’. Vitkauskas created an unusual chair made of natural laminates for this competition, encrypting codes of Lithuanianism in a postmodern form of expression: nature, cultural roots, antique farming implements (a harrow), the Lithuanian language and the national anthem, (dis)comfort and (non)communication.  In the playful syllabification of the name of the chair Ku-dir-ka, we recognize the name of Vincas Kudirka, the author of the Lithuanian national anthem and ideologist of the Lithuanian national renaissance, and we are faced with even more riddles about the chair. The semiotician Gintautė Žemaitytė descried a bell-shaped form as an ironic interpretation of worry over everyday comfort. This chair won first place at the Neformate competition; shortly after that it was begun to be manufactured by the design firm Contraforma, and in this way it began to be shown at many international design exhibitions from London to Paris to New York.  In 2008, the designer Julijonas Urbonas, who frequently collaborates with Vitkauskas, installed an electronic counter on the chair which records its cyclical movement while rocking. As a result, the chair became an object of interactive design.

Paulius Vitkauskas completed his design studies at the Vilnius Academy of Arts in 2006. He continued his studies and obtained a diploma in architecture (2011). Since 2002, he has been creating designs for advertisements, furniture, interiors and exhibition design, and actively participating in competitions and exhibitions in Lithuania and abroad. Vitkauskas’s architectural designs have merited a number of prizes, including the 2009 Golden Palette at the CAC SHOP for the best detail in interior design.