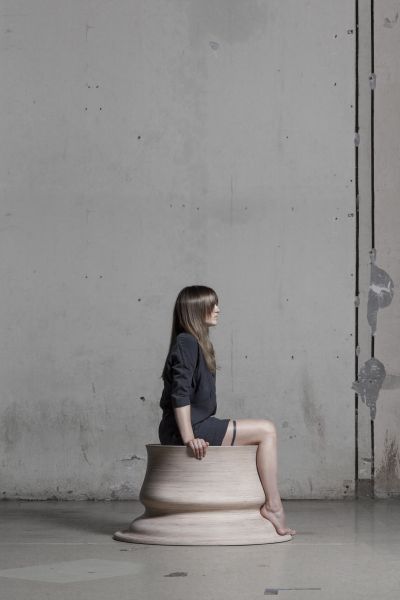 It is an object from Marija Puipaitė’s (born 1987) ongoing project Embracing Touch submitted as a master’s thesis exhibit at the Design Academy Eindhoven in 2014. Later it appeared in many exhibitions, for example, the international Baltic design exhibition Roundabout Baltic (2016-2017). This is a conceptual design project that asks questions about a designer’s relationship with his or her work. When creating everyday objects, designers express their existence at every instance and give a part of themselves to be used. Marija Puipaitė’s designs transcend the boundaries of perception of a product’s design, with the product being presented in a very personal relationship, often as though it were an article of clothing or an integral part of the body.

Marija Puipaitė is a graduate of the Vilnius Academy of Arts, and completed her master’s degree studies in contextual design at the Design Academy Eindhoven. She participates actively in exhibitions in Lithuania and abroad.  She also lectures at design institutions in Vilnius, and collaborates with Lithuanian firms, including ACME Europe, developing such products as PEANUT mouse, the headphones JUNGLE and MOON (2010-2011), and also the Lithuanian brand House of Naive. Lately, Marija Puipaitė, has become well known for her conceptual jewellery projects, which were presented at the Milan Salone del Mobile thematic exposition, Age of Man in 2017.