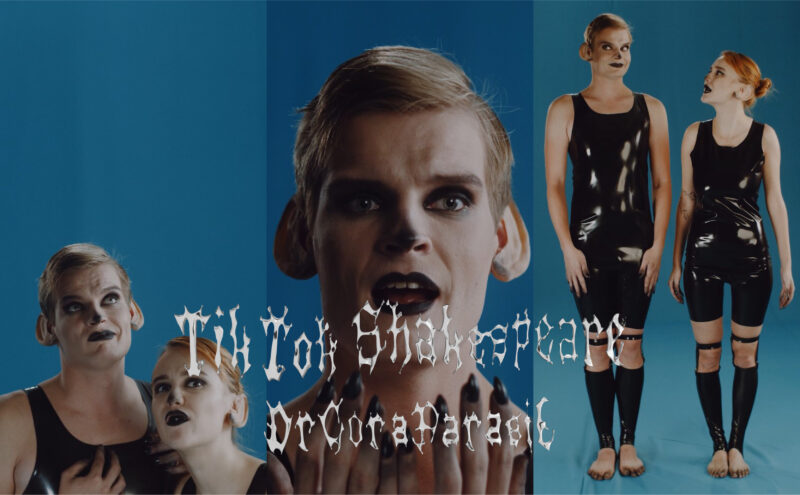 Theatre artist, experimental filmmaker and designer Gintarė Minelgaitė (b. 1984) is better known by the pseudonym Dr. GoraParasit. The Kaunas-born artist graduated from the Lithuanian Academy of Music and Theatre in 2005 with a degree in acting, after which she went to London, where she changed her sphere of interest and undertook his second bachelor, this time in graphic design studies at School of Art, Architecture and Design, part of the London Metropolitan University. While studying design, Minelgaitė worked extensively with various publications, books and their restoration. She also applied her knowledge while working as an art director on the projects “Future Shorts” and “Secret Cinema”. However, soon Minelgaitė returned to the theatre and in 2013, graduated with a master’s degree in directing from the Royal Central School of Speech and Drama at the University of London. During her studies, she repeatedly participated in an international summer program at the Watermill Center founded by Robert Wilson in New York, USA.

Characteristic to this artist’s work is expressive, grotesque, harsh visual aesthetic that is rather unusual on the Lithuanian scene. She shapes her artistic identity through audiovisual experiences, combining theatrical means, discoveries in neuroscience and elements of digital culture. In her works, especially performances and experimental films, Dr. GoraParasit constantly challenges the allowed limits, giving preference to extremes. The artist combines the impact of the visual with intellectual stimuli, basing her energetic performances on scientific discoveries.

In 2017, Dr. GoraParasit won the award for the best music video at the Vilnius international film festival Kino pavasaris. In 2019, the comic book opera Alfa (Operomania) won her the Golden Cross of the Stage. In 2020, the video clip Baloje created by GoraParasit for the band Solo ensemble won at the music video clip festival The Music Video Underground.

One of the latest works by Dr. GoraParasit in Lithuania is the performance Tik Tok Shakespeare (2020). In it, the artist relies on the theory that the concept of social networks originated way before the invention of the Internet. According to Dr. GoraParasit, in William Shakespeare’s dramas, we can find a variety of social media metaphors that can help create connections between technology and the humanities. In this performance, Shakespeare’s texts become a bridge between the audience, the actors and the stage, and social networks are perceived as bridges connecting people with events and experiences in other people’s lives. In this context, the playwright’s famous statement, “All the world’s a stage” becomes more relevant than ever.