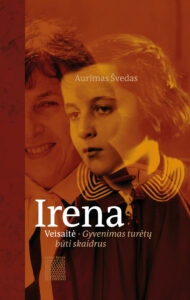 The intellectual Irena Veisaitė’s story is a love letter to life, portraying its darkest abysses and its brightest heights in equal measure. Historian Aurimas Švedas interviews an exceptional woman: Irena Veisaitė, a scholar of German and theatre. Her life spans almost a hundred years through the interwar period, the Second World War, the Soviet era and Lithuanian independence, rich with Lithuanian culture and history that has been filled with anguish. Born in interwar Kaunas, and later saved from the Kaunas ghetto, she survived the Holocaust, and showed, in her later life, that forgiveness, life without anger, revenge and hatred is the duty of the living. Veisaitė’s non-judgmental gaze and tone are a testament to her erudition and her fundamental respect for others, while the focus on the present and a desire “to judge an epoch in its own context” transform her story into a multifaceted text bursting with life.

Aurimas Švedas is a historian of culture, and lecturer at the Department of History at Vilnius University. It is now ten years since he first started using the oral history method to create personal portraits of eminent Lithuanian scientists and artists. He has written and edited nine books. Keywords: oral history; 20th century story; personal history; Holocaust; Soviet era. I