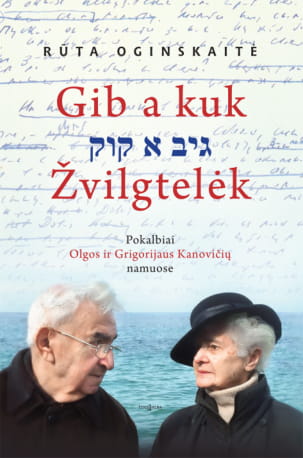 “Gib a kuk is a Jewish saying which invites one to have a glimpse – to take a look.” In this way, in the very first sentence of her book, Rūta Oginskaitė provides an angle from which to read her work, offering twelve insights into the work and life of Grigory Kanovich (also known as Grigorijus Kanovičius), a writer and a laureate of the Lithuanian National Culture and Art Prize, who has lived in Israel for over two decades. His wife Olga, affectionately called Olia, whom Kanovich constantly thanks and calls “almost a co-author”, also organically participates in these conversations; and, as Oginskaitė stresses, “we can’t do without Olia, she adds specific details and frames the narrative.” His exceptional works naturally fit into these explorations of the 87 years of the writer’s life – Kanovich is the only writer who, in his works, has immortalized the life of Lithuanian Jews before the Second World War, thus restoring Jewish life in verbal formTherefore, it is not surprising that the conversations start from what for Kanovich was the city of cities – Jonava, where he was born and raised until the age of twelve and which he resurrected in his works, evoking all its contemporaneous pre-war life. From Jonava, the conversations transition to the war period and post-war years, life in Vilnius, Kanovich’s studies, the beginning of the writer’s career, many years of work at the Lithuanian film studio, the writer’s creative path, Lithuania’s freedom, and his current life in Bat Yam. Many legends, attributes, and famous people of the period play their role and come to life in unexpected guises in these conversations, which Oginskaitė supplements with external sources – with reviews, articles, and quotes from Kanovich’s works, as well as with telling details from their everyday life. “A work of literature must have an underlying thread!” – such is the advice given by Kanovich’s literature teacher, which almost imperceptibly compels one to look for similar such threads in this book of conversations. The most important thread is the life and creative biography of the writer Kanovičius, but alongside this there runs another one – the author’s stances and insights filled with wisdom and life experience, not only touching on the past but also on the future, and ultimately reflecting, in a calm and comprehensive manner, on the most important issue – Lithuanians and Jews. “<…> the emphasis is placed less on the good, more on the bad. Though very understandable from a human point of view, but both sides are far away from the truth: those who idealize that chunk of history, and those who besmirch it.” – says Grogory Kanovich.

Rūta Oginskaitė – a theatre and film critic and journalist, who collaborates with websites www.menufaktura.lt and www.lfc.lt, and a member of the Lithuanian Association of Cinematographers. She has worked for many years with numerous culture periodicals, and took part in the founding of the art weekly ‘7 meno dienos’; under her initiative and efforts, the daily ‘Lietuvos rytas’ began an art and culture supplement ‘Mūzų malūnas’, where she worked as an editor in 1996–2006. In the past decade, in addition to theatre and film criticism, she has written biographies of famous people from Lithuanian culture and art. Her book about songwriter and actor Vytautas Kernagis Nes nežinojau, kad tu nežinai (Because I didn’t know that you didn’t know), published in 2009, made Oginskaitė famous beyond the circles of culture experts and fans. In October 2020, her seventh book, which took a decade to write, saw the light of day – a story about the legendary Lithuanian film director Arūnas Žebriūnas Žebriūnas. Silences and Paradoxes.