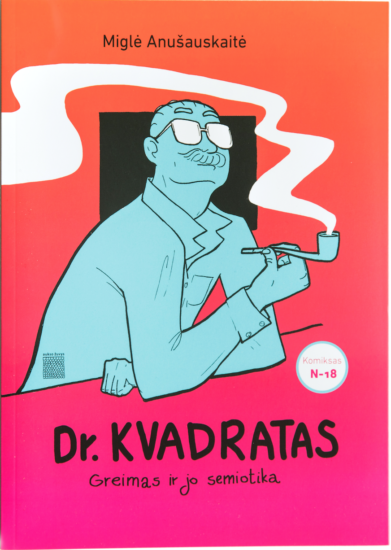 The year was 2017, the centenary of Algirdas Julius Greimas (1917-1992), the founder of the Paris School of Semiotics and one of the most renowned Lithuanians in the whole world. It was then that Miglė Anušauskaitė designed a comic book dedicated to Greimas and to his “scientific project” (as he himself called it), semiotics, which became both the most unexpected book of the year and a work presenting and popularizing semiotics. The comic has an attractive and clear structure – the reader is introduced not only to events from Greimas’s personal and professional life as well as the people who acted in them, but also to the most important theoretical issues and contexts in semiotics. Those wishing to get acquainted with semiotics may find the pages of grey marginalia exceedingly useful, in which the author explains, while elucidating the differences between various theoretical concepts and notions in an attractive and lucid way. Reading the book, one is fascinated by how gracefully and wittily Anušauskaitė plays, first of all, with different fonts (the author’s work vs. a quote), or else how she weaves iconic photos of Greimas into her visual story, or how she charmingly tickles myths and exposes masks of the academic world. Halfway through, the comic book takes a turn onto a new path, boldly paved by the author’s astonishing self-irony, proving that Anušauskaitė has managed to tell the story of Greimas’s life and the ideas he created without deification or idolisation: “In this comic book, I wanted to showcase not only Greimas’s ideas but also the environment in which they germinated and evolved – the forces that did, or could have, influenced them.”

Miglė Anušauskaitė is a comic book author and senior researcher at the Judaica Research Center. Born in Kaunas in 1988, she later lived in Pakruojis and Vilnius, where she studied, read, wrote, and eventually began to draw. She graduated from Vilnius University with a bachelor’s degree in journalism and a master’s degree in semiotics. The topics of the author’s work include literature (a comic column in ‘Šiaurės Atėnai’ since 2013), cinema (a column in kulturpolis.lt since 2014), history (the book 10 litų, together with Gerda Jord, 2014, published by Aukso žuvys; in 2015, the book won the Patriots’ Prize). Her works have been exhibited in collective exhibitions in Italy, the Netherlands, the Lithuanian National Art Gallery, as well as in a personal comic art exhibition in Klaipėda.