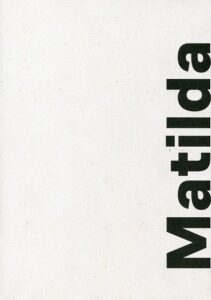 What does it mean to open a murdered young poet’s diary 80 years after her death? This book is what would have been Matilda Olkinaitė’s early work, if it hadn’t been for the Holocaust. It collects intimate diary entries – a testament not only of her talent but also of the moral imperative captured in one of her poems: ‘and still I have another wish: to be a human’. Matilda Olkinaitė’s life ended in one of the first unmarked Holocaust pits in the Rokiškis district of Lithuania, in July 1941. Barely 19 at the time, she was a talented poet of great promise. ‘Quietly, without a sound, like fog in the twilight / a beautiful butterfly was extinguished forever…’ – were the words from a poem Olkinaitė wrote in 1937. Growing up in a Jewish pharmacist’s family, she spoke five languages but despite that chose to write only in Lithuanian. Olkinaitė was well known in her district, with her work published in the press on many occasions. “The Unlocked Diary” is the first attempt to bring her work out of oblivion by publishing it all in one volume. The book mainly consists of Olkinaitė’s notebook and a diary written between August 1940 and February 1941. Both the notebook and the diary were hidden away during the war and are the sole records of Matilda’s final years. Her works which were published between 1932 and 1940 are also included here. Irena Veisaitė, the professor who survived the Holocaust and preserved Olkinaitė’s writings, says that ‘the entire Lithuanian tragedy emerges in front of my eyes trough Olkinaitė’s work’.

Matilda Olkinaitė (1922–1941) was a young Lithuanian Jewish poet, who wrote in Lithuanian and perished in the Holocaust. She was born in Panemunėliai town, Rokiškis district, in the family of a pharmacist, and graduated from Rokiškis Juozas Tumas-Vaižgantas high school. Olkinaitė studied French at Vytautas Magnus University and Vilnius University. She started publishing her poems and prose in 1932 and was preparing a debut poetry collection. On 10 July 1941 she was brutally murdered by Lithuanian Nazi collaborators in Kavoliškis forest together with the Olkinas and Jofė families. Priest Juozapas Matelionis saved her notebook and hid it at the Panemunėlis church, in a secret spot under the altar. Organist and dissident Alfredas Andrijauskas discovered the notebook in the 1990s and handed it over to Professor Irena Veisaitė. Later Veisaitė also managed to find Olkinaitė’s diary which she wrote between 1940 and 1941 – documenting the personal and historical tragedy.

English: The Unlocked Diary: The Diary and Poems of Matilda Olkinaitė. Translated by Laima Vincė. Vilnius: The Institute of Lithuanian Literature and Folklore, 2020