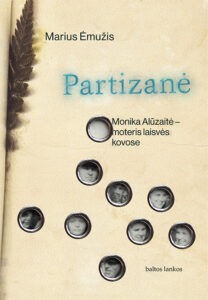 The most authentic herstory, this is the portrait of Monika Alūzaitė – a brave woman, who was active in guerilla warfare. The book reveals the reality of World War II and the post-war years, specifically shedding light on women’s role in the Lithuanian resistance movement. This academic study by the historian Marius Ėmužis is primarily guerilla fighter Monika Alūzaitė’s biography, but also the story of ‘some guerillas from Žemaičiai district, who were active in Šatrija’, and of their associates and those who tried to capture them. So this is a portrait of the whole Lithuanian post-war generation. When telling these stories, Ėmužis strikes a balance between captivating language and a researcher’s precision, while avoiding inaccessible academic jargon. Monika Alūzaitė’s biography is probably the first book to depict women’s vital role in the Lithuanian guerilla war against the Soviet government from 1944 to 1953 in such detail. For a long time, it was believed that women were merely messengers and helpers in the war, but Ėmužis’ research shows that their role was just as important as men’s. ‘Writing this book, I realised that the boundary between home and a bunker is very fluid,’ Ėmužis has said. His reconstruction of Alūzaitė’s life allows us to better imagine and experience the life of a woman guerilla fighter. Alūzaitė’s diary was used to help recreate the humane and authentic emotional side of this life story.

Dr Marius Ėmužis is a historian and a lecturer at the History Faculty of Vilnius
University. In 2016 he submitted his dissertation “Soviet Lithuania Ruling Elite
1944–1974: interpersonal relations and their expression”. His research areas include
the history and activity of Comintern (The Communist International), the nomenclature of Soviet Lithuania, and the guerrilla war in Lithuania.