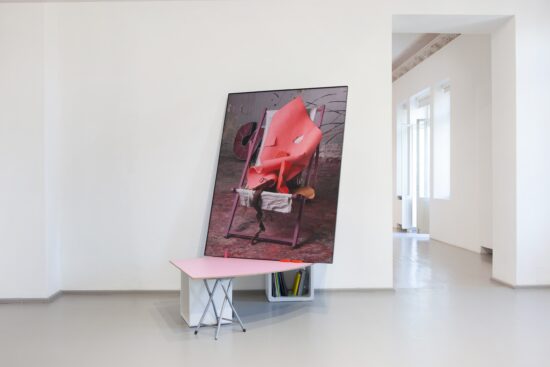 Perpetual uncertainty is the strategy chosen by Robertas Narkus (born 1983) for his creative practice. By combining artistic, scientific, business, and management strategies, he initiates and simulates original events and performance projects, and creates objects and installations in collaboration with others. Narkus identifies himself as a co-founder of the Vilnius Institute of Pataphysics, the Autarkia day centre for artists, the experimental engineering camp eeKūlgrinda, and Vizionierius, a platform for cooperation between artists and private businesses. His projects, which range widely across the artist’s many interests – including scientific representation, modern technology and engineering, the role of (artistic) labour in today’s economy – evidently involve searching for a logical sequence and aspiring to break it.

The artist describes his practice as a “management of circumstances in the economy of coincidences.” In 2012, he developed an on-going project called ‘12/5 Chances’ which became the basis for his 2014 publication ‘Aplinkybių vadyba’ (‘Management of Circumstances’). Narkus’s first solo exhibition at the Contemporary Art Centre in Vilnius (2017) served as a commentary on the potentialities of modern technological advancements such as artificial intelligence and augmented reality. It analyzed our current existence charged with both enthusiasm and pessimism regarding developments in science, technology, and economics. In his latest project, ‘Prospect Revenge’ (2019), the artist creates a different augmented reality – a fictional business initiative aimed at transforming negative emotions into financial resources through a complicated financial scheme. Advertising the buying-up of surplus anxiety, he reflects on a powerlessness of optimism encountered in the cultural life, which often overlaps with the aesthetics and rhetoric of the corporate world.

Robertas Narkus graduated from the Vilnius Academy of Arts in 2006 and the Sandberg Institute in Amsterdam in 2015. He took part in exhibition shows at the Ujazdowski Castle in Warsaw, Polansky Gallery in Prague, Delfina Foundation and Whitechapel Gallery in London, Ballroom Marfa in Texas, Stedelijk Museum and De Appel art centre in Amsterdam, Stroom Den Haag in The Hague, Établissement d’en face in Brussels; had solo exhibitions at David Dale Gallery in Glasgow, Editorial project space and the Contemporary Art Centre in Vilnius, Kim? Contemporary Art Center in Riga, Juliette Jongma Gallery in Amsterdam, and the Tenderpixel Gallery in London. In 2014, he was awarded the Young Artist Prize by the Ministry of Culture of the Republic of Lithuania.