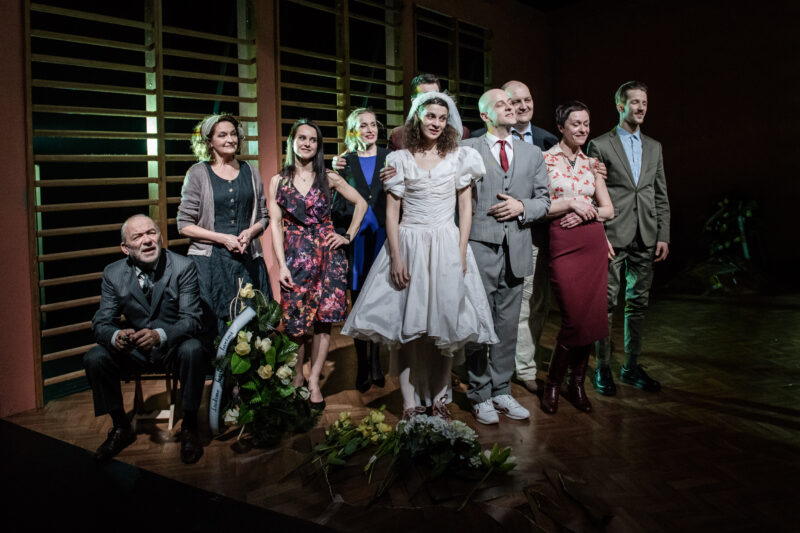 “Tales from the Vienna Woods”. Photo by  Laura Vancevičienė

Yana Ross (b. 1973), a director who creates theatre on an international level, grew up in Latvia, spending her childhood between Europe, Russia and the USA. Between 1991-1992, he studied at the Russian Institute of Theatre Arts in Moscow (GITIS). In 1995, she received a BA in mass communications from Quinnipiac University in Hamden, Connecticut; in 2006, she graduated from the Yale School of Drama, where she is currently a PhD candidate. After completing her studies, Ross taught theatre-related subjects, worked and directed in New York and Berlin. She has made experimental films and directed television programmes for such channels as HBO, ParisPremière and E! Entertainment. Ross was the first woman to stage a play at the famous Volsbühne Theatre in Berlin and has put on productions in the USA, Japan, South Korea, Russia, Germany, Poland, Finland, Sweden, Iceland and Norway.

Ross came to Lithuania in 2006 on a Fulbright scholarship. She first appeared on the Lithuanian stage in 2007 with her productions Bambiland based on the work by Elfriede Jelinek (at the Lithuanian National Drama Theatre, a co-production with the OKT/Vilnius City Theatre) and Lucy Skates (Liučė Čiužia) based on the play by the Lithuanian dramatist Laura Sintija Černiauskaitė (OKT/Vilnius City Theatre). During the past decade, she has created over ten drama and opera productions and directed play readings. For the past five years, Ross has been actively working in various theatres in Scandinavia and Poland, and in 2019, she went to work in Switzerland for three years. She is currently one of 8 guest artists permanently residing at the Zurich City Theatre.

In her interpretations of classic and contemporary works, Yana Ross always conducts thorough artistic research, seeking to tap into the heart of the piece, which she connects on stage with the present day and the historical and social context in which her works appear – it might be Lithuania or Iceland, or elsewhere.

In 2014, Ross received the Golden Cross of the Stage award for her production of Our Class (Mūsų klasė) by Tadeusz Slobodzianek. In 2015, she was recognised as the best director in Sweden for her staging of Anton Chekhov’s Uncle Vanya at the Upsala Theatre, which was followed by the award for best directorial work in Iceland for her interpretation of Chekhov’s The Seagull at the Reykjavik City Theatre. That same year, she won the best director award at the Kontakt International Theatre Festival in Torun in Poland.

The latest performance directed by Ross in Lithuania is an interpretation of the singular 1931 work by the Austrian-Hungarian playwright Ödön von Horváth “Tales from the Vienna Woods” (2019). The director, together with the playwright Mindaugas Nastaravičius, adapted the play dedicated to Austria at the beginning of the last century to Lithuania at the beginning of the current century with great exactness and precision. As has become usual for the director’s recent performances, the main tool and an irrefutable argument in Ross’s hands as she performs the dissection of society becomes the strong ensemble of actors. However, the picture we see on stage is not pleasing to the eye landscape, on the contrary: the hills and mounts we usually imagine when we talk about the Homeland turn into heaps of bulging parquet, structural investments – into a sloppy “European style renovation” (scenographer Justyna Elminowska), patriotism – into nationalism, a family gathering – into a squabble, the family becomes a source of tragedies, not to mention a bouquet of addictions and their consequences. Such a portrait of Lithuania – in dark colours and rough strokes – shocks, saddens, inspires the urge to resist it, but does not let viewers get away without looking in the mirror.