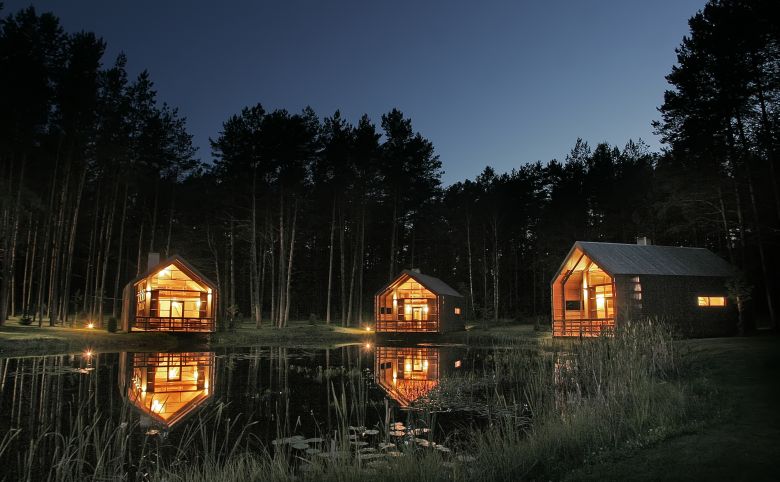 Three architects are at the centre of the Arches architectural aesthetics studio: Rolandas Liola, Arūnas Liola and Edgaras Neniškis. Arches collaborates with various architectural groups and individual architects. The architects focus on conceptual unity and simplicity. The work of the young but very experienced firm runs the full spectrum from small building projects to large urban projects. The reconstruction of the Nakcižibis resort is marked by a subtle connection with the local landscape and history. According to the architects, the graphic patterns of the surrounding trees and the grace and transparency of the pine forest complement the volume of the cabins suspended over the water. The idea of the archetypal silhouettes of buildings shining in the night was inspired by its name (‘shining in the night’), and the form was inspired by the neighbouring ethnographic villages. The compact volumes of the buildings, loosely scattered among the pine trees, ensures privacy for the guests, a connection with the environment, and an intimate scale. The buildings are finished with natural traditional construction materials: wood, shingles and stucco. This project, which continues the traditions of Lithuanian recreational architecture, has received a number of awards, including a prize from the Lithuanian Ministry of the Environment for creative achievements in urban planning and architecture.

In 2017, Valley Villa, designed by the Lithuanian Arches architectural studio won the ARCHITECT: The Magazine of the American Institute of Architects annual international Residential Architecture Design Awards Grand Prix in the category Custom House More Than 3 000 Square Feet. Arches is the first studio from Eastern Europe to win this prize.