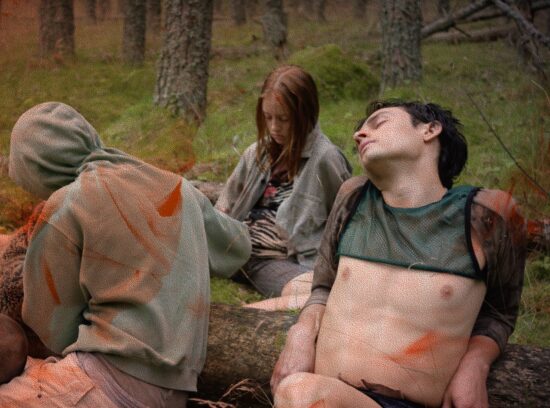 Eglė Budvytytė (1981) creates performative and cinematographic situations in which she explores the body’s ability to challenge the conventions of conduct in public spaces. Authentic movement contrasts with the rational, homogenizing layout of the city. Her work manoeuvres between ordinary and scripted behaviour and searches for gaps and cracks where forms of unusual, coded behaviour emerge. Using documentary (with the clichés of film language and the realities of the city or urban processes created by social groups) as a springboard, Budvytytė creates poetic commentaries through her films and public happenings that defy the usual expectations of the audience, and thereby reminds us that the potential for change lies in our imagination.

In her performance ‘Incantation Karaoke’ (2018-2019), Budvytytė explores the themes of eco-feminism, the extinction of various species, and the arrogance of man as a living being. Strolling around the performance space, the artist sings repetitive melodies rhythmically and monotonously – like charms and incantations. Various non-human forms of life speak through the artist’s voice and her body movements. In the second part of the performance, the audience is invited to sing along, thereby becoming vulnerable in the face of the microscopic forms of life which are verbalised in the improvised karaoke. These invisible creatures (bacteria, detritivores) are particularly important in maintaining the Earth’s ecosystem.

Budvytytė’s work has been widely exhibited in Europe and around the world, including the 13th (2019) and the 11th (2015) Baltic Triennial of International Art, the Stedelijk Museum in Amsterdam, the São Paulo Museum of Modern Art, the Biennial of New Visual Art Performance at the Swiss Institute in New York, the Power Plant in Toronto, and Museum of Contemporary Art Kiasma in Helsinki. She has taken part in the Palais de Tokyo/Le Pavillon artists’ residency programme in Paris (2011–2012).