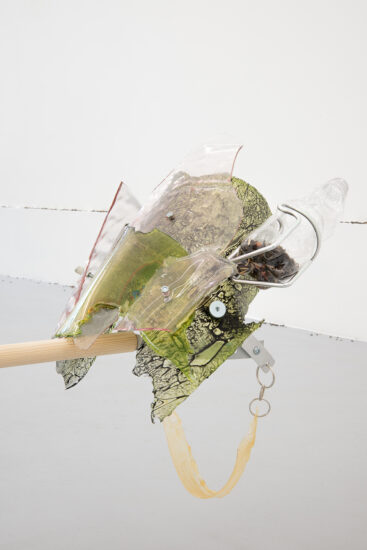 Sosunova’s work explores the connections around which communities are built – from local folk art and neighbourhood co-existence to religious organizations. She is interested in the formation and functioning of these closed groups, which often act as a response to different values or ways of being; she looks at how these groups survive thanks to shared sentiments, rituals, traditions, and collective agreement. Interweaving and distorting the elements of public surveillance, hybrid creatures, and ancient mythologies, Sosunova creates alternative forms of ‘contemporary folklore’. From lifestyle to foundations of faith, these new folklores are simultaneously a play with notions of home and belonging to a community, an attempt to question forms of existence and coexistence, and a critical approach to power structures and collective psychology. Her works are like proposals for novel ways of coexisting, new relationships based on rules, codes, ethics, and mutual agreement between beings.

The title of the video installation ‘Demichov’s Dog’ (2017) refers to the Russian scientist Vladimir Demichov, a pioneer of organ transplant operations. In the 1950s, he conducted controversial scientific experiments to create two-headed dogs. For Sosunova, Demichov’s history becomes a means of reflecting on cultural differences in geographically neighbouring countries. The video installation was presented at the Ignalina Culture and Sports Centre, near the Lithuanian-Belarusian border, and exhibited in dialogue with a Soviet-era fresco depicting local animals in an exoticizing graphic expression.

Sosunova graduated from the Vilnius Academy of Arts with a bachelor’s degree in graphics and a master’s degree in sculpture. Some of her most important exhibitions and art projects include the 2nd Riga International Biennial of Contemporary Art RIBOCA 2020; solo exhibitions at Kogo in Tartu (Estonia), Editorial project space and the Vartai Gallery in Vilnius; group exhibitions at the Vilnius Contemporary Art Center, the National Gallery of Art in Vilnius, I: project space in Beijing, and The Sunroom in Richmond (US). The artist has participated in artists’ residencies at Rupert in Vilnius, Achterhaus Ateliers in Hamburg, Funen Art Academy in Odense.