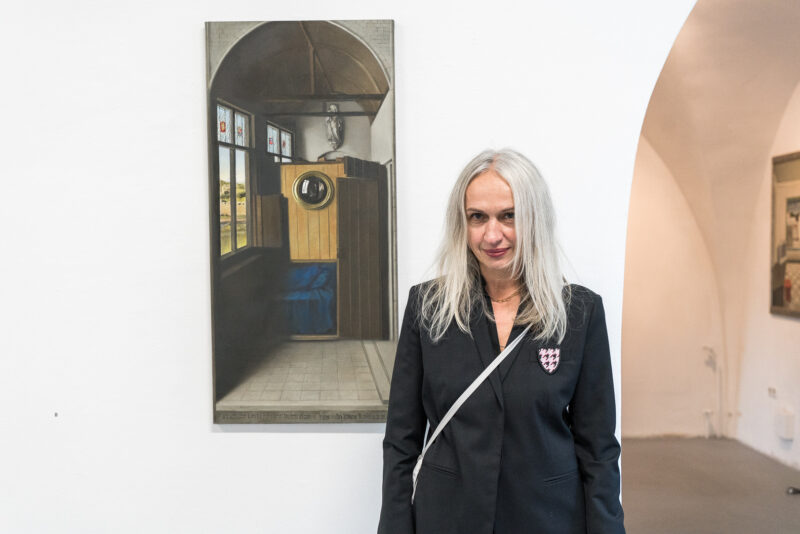 Patricija Jurkšaitytė next to her work at the Neue Galerie im Höhmannhaus in Augsburg. Photo by Katarina Sopcic

On 6 October, an exhibition of the works of the painter Patricija Jurkšaitytė titled Shelters // Bleiben was opened at the Neue Galerie im Höhmannhaus in Augsburg (south-western Bavaria), the artist’s first personal exhibition in Germany. The exhibition presenting Jurkšaitytė’s paintings spanning the past two decades (from 2005 to 2021) is a part of the programme of the Lithuanian culture season in Bavaria.

From a virtual art showcase to a real-life exhibition

Thomas Elsen, the director of Neue Galerie im Höhmannhaus, decided to hold Patricija Jurkšaitytė’s exhibition after getting acquainted with her work in the digital showcase of Lithuanian visual arts organised by the Lithuanian Culture Institute together with the Contemporary Art Centre in December 2020. After watching a specially created video presenting Jurkšaitytė and talking to her in a remote interview, Elsen was impressed by the uniqueness of the Lithuanian artist’s creative style. “Patricija Jurkšaitytė is a classic painter whose art strikes with its supposed recognisability. She makes invisible things visible, emphasising their absence. In addition to her impressive creative ingenuity, Patricija stands out with her virtuoso painting technique, which helps her use the 14th-century classic Dutch or Italian models of landscape and genre painting and to translate them into new visual narratives unique to her,” commented Elsen.

Presenting Jurkšaitytė’s paintings at the opening of the exhibition, namely, The Bed of Venus based on Giorgione’s famous Sleeping Venus without Venus (2014), Arnofilni Family Room, abandoned by Jan van Eyck’s Arnolfini family (2021), the empty table of Leonardo da Vinci’s Last Supper (2014), and other landscapes and interiors that are also devoid of human figures, the freed space seemingly inviting to fill it with new stories, the head of the gallery drew the attention of the gathered art lovers to the painting from the cycle Degantis pasiūlymas (Last Minute Offers, 2014), in which the artist “inserted” a large Turkish hotel complex into a da Vinci-style landscape, and Patricija’s then five-year-old daughter, who had recently learned to write, wrote her name, Sibilė, on the wall of the painted building.

“This work is the closest to my heart,” said the artist. “I decided not to correct it, not to get rid of that addition because it became very precious to me. Now my daughter is not so proud of her autograph anymore,” joked Jurkšaitytė.

The exhibition, which the artist gave a joint English and German title, Shelters // Bleiben, consists of works from the cycles Last Minute Offers, Miegamieji (Bedrooms), Viešbučių kambariai (Hotel Rooms) and Peizažai ir interjerai (Landscapes and Interiors). The artist also painted four paintings especially for this exhibition. The works presented at the Augsburg gallery have been lent by the MO Museum, the Lewben Art Foundation and private collectors. Curator Asta Vaičiulytė assisted in organising the exhibition.

Stories of the old house

Neue Galerie im Höhmannhaus is located in the old town of one of the oldest German cities, founded 15 BC, in a house dating back to the beginning of the 17th century, which in 1934 was acquired by the family of the ophthalmologist Höhmann. Ruth Höhmann (1915–2004), the doctor’s only daughter, had decided not to pursue the family profession and studied economics. For four decades from 1947, she led the Bavarian Construction Industry Association. Ruth gave the lower floor of her house, where her father’s clinic operated, to a gallery of contemporary art, while she was still alive. After her death, Ms Höhmann not only left € 4 million for Augsburg Hospital but also gifted the entire large four-storey building to the city to be used for cultural purposes.

Thomas Elsen, who remembers Ruth very well, said that this singular lady never went to openings of the exhibitions as she did not like the crowd, but made sure to see all the exhibitions later and discuss them in detail with the gallery manager. “Ruth was rather short, but you never thought that the huge apartment above the gallery – over 300 square metres – was too big for her. It seemed to offer just the amount of space she needed. I think Ruth would have really liked Patricija’s exhibition. Somehow, she continues to visit the gallery,” the gallery manager shared some stories of the old house.

At the end of October, Arturas Bumšteinas presented his new piece at the media art festival LAB30 in Augsburg. The programme of the Lithuanian cultural season in Bavaria also included the residence of playwright Birutė Kapustinskaitė at the Residenz Theatre in Munich.

In November, the final events of the Lithuanian cultural season took place for three days at the Blaibach Concert Hall. The contemporary music ensemble Synaesthesis, which has won the prestigious Bavarian Prize, the special Ernst von Siemens ensemble prize, performed the Lithuanian composer Žibuoklė Martinaitytė’s piece The Hadal Zone, which the composer was writing while residing in Blaibach this summer.

In the lobby of the Blaibach Concert Hall, the exhibition Ancient Woods by G. Česonis was opened. For this show, the photographer captured the oldest trees in the forests of Kaunas vicinity and during his summer residence in Blaibach, following his vision of the impenetrable forests that once connected Lithuania and Bavaria. The Lithuanian chamber choir Aidija compared Lithuanian and German choral culture, and in another event, accordionist Martynas Levickis performed a programme of a wide stylistic range.

More images from the opening of Patricija Jurkšaitytė’s exhibition can be found here: https://www.facebook.com/LithuanianCultureInstitute