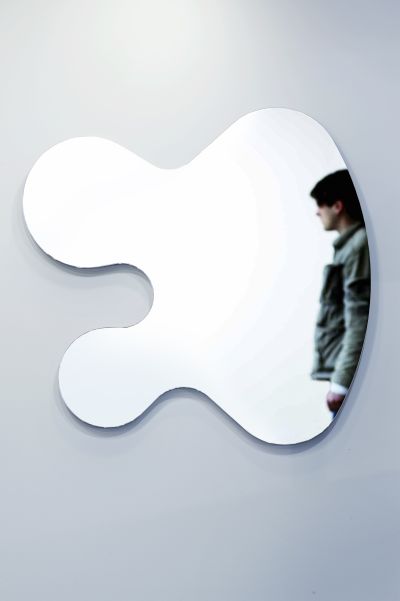 Most often we look into a mirror wishing to see our own reflection and not someone else’s, however the designer Juozas Brundza (born 1977) proposes another point of view.  In 2014, he expanded his series of designer objects by creating the mirror For Three, which was awarded a diploma prize at the BALDAI’2014 furniture exhibition. This could be considered a follow up to his mirror For Two of 2009. In creating new design objects, Brundza looks for solutions that have been refined and are minimalist, but original, incorporating concept, form and function.

Brundza is best known in Lithuania as the head of the Department of Design at the Vilnius Academy of Arts, his alma mater, since 2011. Beside an academic career, he established the design firm LTD Studio, and works in the field of furniture, interior and industrial design. Brundza is also known for participating in national and international exhibitions, where he has received important prizes and awards: for example, he won first place in the Neformate competition in 2008 for the clothes hanger Auga / Growing, which was recognised as the best industrial design for furniture at the Baltic Furniture Design Competition. In 2017, Brundza’s Shift was in the Top 15 best projects at Samsung’s international QLED TV stand design competition, organized together with Dezeen.