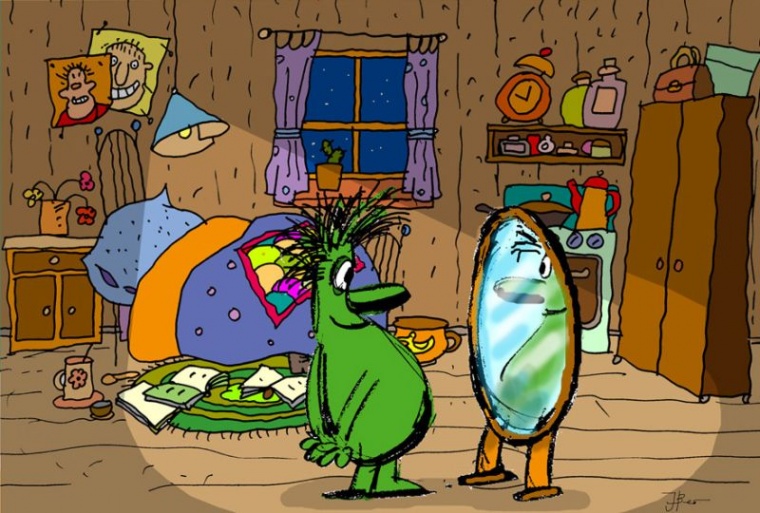 The animation classic Ilja Bereznickas (born 1948) took his style from the world of caricature, which allows us to look at simple things from unexpected angles. On graduating in 1970 from the Kaunas Polytechnic Institute with a degree in architecture, he turned to professional animation. In 1982 he went to Moscow to study at the Postgraduate School of Scriptwriters and Film Directors, from which he graduated in 1985. His most famous film, Baubas / The Hobgoblin, came out in 1987, and won a Mio Award at the International Film Festival in Tomar in Portugal. An adventure story about the friendship between a girl and a hobgoblin, who has been imagined by her parents, it was an instant hit with children and adults. The film was so successful that Bereznickas made three more animated films about the Hobgoblin, and became a cult classic. We could call Hobgoblin the Lithuanian Shrek. Elements of parody and his brilliant way of making characters change in unexpected ways made it very successful. Over his long career, Bereznickas has worked in film studios in Lithuania, Norway, Israel and the USA. In 1997, he worked in Norway as a creative director in the studio Filmcameratene on the full-length film Gurin with the Foxtail. This film premiered in Cannes and Annecy and was awarded various international festival prizes. He has taught animation at the Vilnius Academy of Art since 2002.

He returned to his immortal Hobgoblin character in 2004, with the film Baubo aritmetika / Hobgoblin Arithmetic and Baubo liga / Hobgoblin’s Illness. In 2014, he was awarded the Order for Services to Lithuania by the President of the Republic of Lithuania. Then, in 2015 during the Fredrikstad Animation Festival in Norway Bereznickas was presented with the Golden Gunnar Lifetime Achievement Award. In 2017, the animated series Timas ir Toma / Timas and Tomas (co-producer Olga Titova) was acknowledged as the best series of the year at the Open Russian Festival of Animated Film, Suzdal).