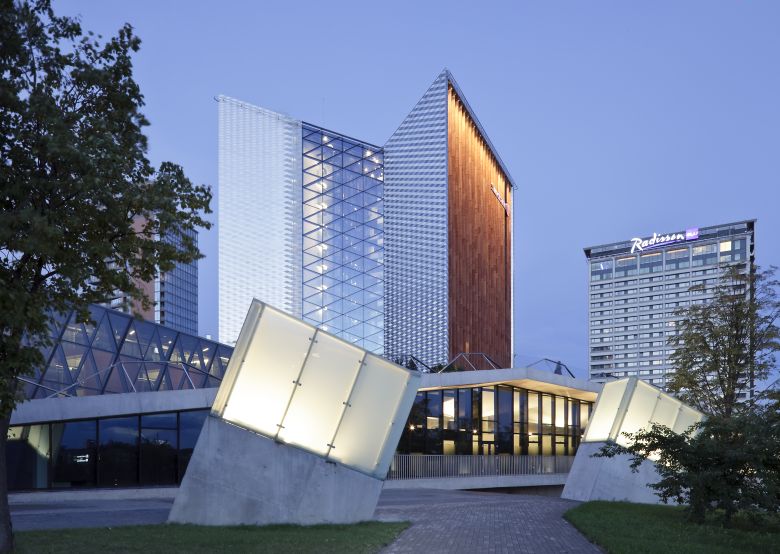 In this building, Audrius Ambrasas (born 1962), one of the most experienced Lithuanian architects, demonstrates the cultural pre-eminence of design and construction. Over the last two decades, Ambrasas has designed a number of buildings that have become landmarks in Vilnius. He is the recipient of numerous awards and nominations, including an international architecture award granted by the Chicago Athenaeum museum of architecture and design. He teaches at Gediminas Technical University in Vilnius, and actively participates in social affairs.

The bank’s head office is located on the left bank of the Neris River, in a centre conceived in Soviet times that sits at the corner of old Ukmergė Street. The main road here intersects a pedestrian walkway, which is a central compositional axis bisecting the area. The stylobate of the building is aligned with the lower part of the adjacent Radisson Blu Hotel Lietuva. Two expressive 16 and 14-storey administrative units, as well as a four-storey horizontal space are composed above it. The architecture concentrates the banking functions around a central vertical axis and projects the image of an open bank. Banking services for the public are located on the ground floor with a view of the River from the adjacent cafe and auditorium. The space on the ground floor is arranged like an open urban space with separate functional zones. On the roof of the stylobate there is an undulating wood-covered terrace of angular forms, which has become a favourite recreational spot for residents of the city. The building is notable for its attention to architectural detail and its eloquent solutions to the use of materials.