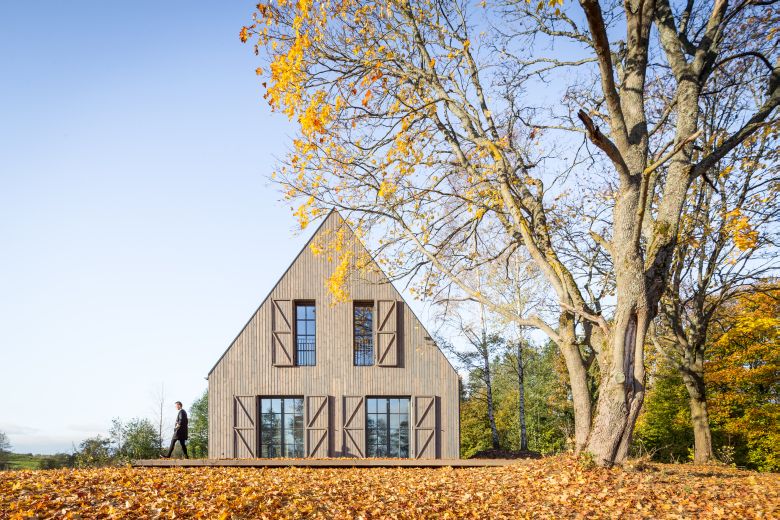 The Aketuri firm, which began its activities in 2001, actively participates in competitions and in urbanistic construction and interior projects. The architects do not shy away from proposing their ideas for the city (for example, their thoughts on Šv. Stepono gatvė) and participating in architectural discussions. The fast-growing collective has already designed more than one interesting project in a sensitive natural or historical context (among them, the Vilnius Old Town and the Curonian Spit, both protected as UNESCO World Heritage Sites), where they try to demonstrate an awareness of the environment and the opportunities presented by natural materials, as well as to search for their own distinctive architectural details.

The recreational Lakeside Villa, understated both inside and outside, does not try to compete with its natural surroundings, but instead invites one to enjoy it. The building is decorated with vertical grey wooden siding and its character is formed by thoughtfully composed windows with shutters and a sharp gable roof, which Aketuri refers to as its calling card. The shutters are both a security mechanism for an episodically occupied house and an unobtrusive reference to traditional Lithuanian village architecture. The simple and logical layout of interior spaces, the views visible from the windows and the laconic interior is a continuation of what the exterior promises – this is a building that knows that not it, but the natural surroundings are the most important thing in this place. This is confirmed by the architect Lukas Rekevičius who is never at a loss for words: ‘In the Dusetos region, on the shore of an unnamed lake this homestead standing in grand solitude is different to many others. It is deferential of the surroundings – it does not try to shout it down, surprise the unaware, and is respectful of scale. Clothed in humble wooden garb, stained a grey that imitates a larch tree weathered by rain and wind, as if saying – don’t pay any attention to me, I’ve been here a long time. No matter that it doesn’t have eaves, awnings, or a veranda. There is no fence. It’s almost as if it’s not a homestead at all.’