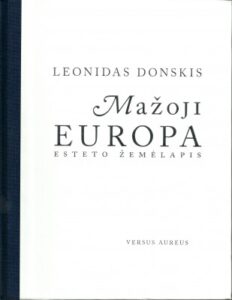 Leonidas Donskis was not only one of the most famous philosophers, historians of ideas, and public intellectuals of modern Lithuania. He was also an aesthete of wonderful inner grace and an art connoisseur, who often used to talk to a circle of like-minded people about his love for paintings of small historical European cities (this love was matched delightfully by his passion for Dutch football). So, it is no coincidence that the first book of this duology, The Little Europe, has the subtitle ’A Map of an Aesthete’ and starts with the following opening sentence: “This book was born out of my unwavering love for old Netherlandish Renaissance, Baroque Flemish, and Dutch paintings.“ However, this is neither an art history textbook nor, as Donskis himself says, “a catalogue of his favourite works of art.“ It is a sketchbook of travel notes, from which an aesthete’s map emerges, with the cities visited, the author’s experiences in them, and the histories of specific works of art related to them. The rethinking, meaning, and influences of these experiences in the narrator’s life are shown through unexpected comparisons and elegant associations. Reading this book is like grasping how all texts are woven together not only by the common themes of art, travel, and personal memory, but also by Europeanness, that hard-to-describe but obvious European identity. This identity is also explored in a much broader perspective in the second book, The Greater Europe, which overlaps with The Little Europe in its stories – eloquent, however small.

At the beginning of the second book, Donskis admits having fatalistic love for Europe, whose cultural map and small (his)stories he composes in the second book, combining visual art, literature, philosophy and history. He thereby proves once again how much he appreciated European culture, whose narrative might have repeatedly saved him from adversity. And all that remains is to say how fatefully prophetic the preface of this book is – Donskis begins it with the 400th anniversary of the deaths of two literary geniuses, William Shakespeare and Miguel de Cervantes, saying that “celebrating death is meaningless but what is meaningful is to read these authors’s works and bring them back to our times”. This idea, however sad, may now apply to both Donskis and his works, which were suddenly interrupted by his untimely death in September of that same year of 2016, as if inscribing Leonid’s name alongside the names of his much-loved geniuses. 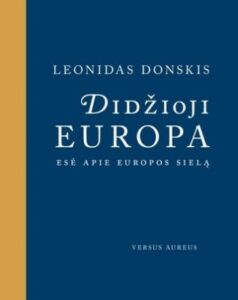 Leonidas Donskis (1962-2016) – philosopher, political theorist and commentator, historian of ideas, and social analyst. He was one of the most prominent Lithuanian public intellectuals of recent decades, an active and consistent defender of human rights and civil liberties. He defended two dissertations in the humanities and in social sciences. He worked as a researcher at universities in the United States, the United Kingdom, Sweden, Finland, Estonia, and Hungary. He taught at Vilnius University, Vytautas Magnus University, University of Helsinki, University of Bologna, and Corvinus University. Donskis is the author of more than 50 books and over 500 articles for Lithuanian and foreign general and academic press. In 2004, the European Commission awarded him the title of Ambassador for Tolerance and Diversity in Lithuania. In 2009-2014, Donskis was Lithuania’s representative in the European Parliament. In 2015, he was awarded the Cross of Officer of the Order for Merits to Lithuania. Donskis’s sudden death on September 21, 2016, was a real shock to Lithuanian society and signified the loss of an insightful critic and unsurpassed erudite.