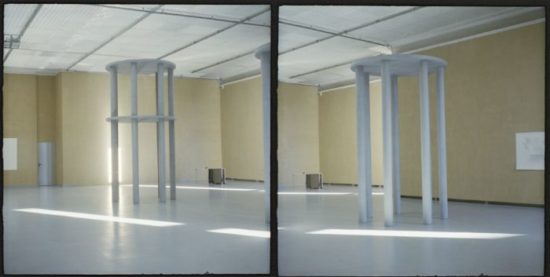 In his work, Antanas Gerlikas (born 1978) explores the theme of representation, which is relevant to many neo-conceptualists, although he subjectivizes and materializes it in his own unique way. Gerlikas’s intention is to never make anything that resembles anything around him, therefore one of his main sources of inspiration is dreams, which offer him otherwise unthought-of forms, spaces, and actions. In Gerlikas’s creative work, these experiences become very concrete – professionally crafted neologisms produced in collaboration with other experts of their respective trades.

According to Gerlikas, he allows his dream self to be led by a strong Force which leads him to where intuition is at play, rather than rationality. A sound experienced in a dream, a sound that took away his peace of mind, returned again to him in the form of an instrument so clearly conceived that it even resulted in the piece ‘Musical Instrument’ (2013) which was used not only in the context of visual art but also in the performance of contemporary music. In the installation ‘Buildings’ (2016), a concrete and steel construction becomes a representation of the structures of a city seen in a dream that looked like a shelter made solely of columns and a ceiling, giving access to an experience of open-plan architecture. Gerlikas’s work, however, can also be characterised by a reversed creative act whereby the artist transforms prosaic and everyday phenomena into surreal artefacts. In a series ‘Friends’ Names’ (2018), various characters and sounds, characteristic to friends, become largely functionless thin glass containers – fragile monuments to closeness and mirth.

Antanas Gerlikas graduated from the Vilnius Academy of Arts with a degree in sculpture in 2008. Since then, he has organized solo and duo exhibitions at the P////AKT exhibition space in Amsterdam, the Contemporary Art Centre in Vilnius, Art in General in New York City, Objectif Exhibitions art centre in Antwerp, and Kunstverein München in Munich. The artist has taken part in group shows at the Rib in Rotterdam, Autarkia artist day care centre in Vilnius, Hordaland art centre in Bergen, the National Art Museum of China in Beijing, SIC project space in Helsinki, the National Museum of Contemporary Art (MNAC) in Bucharest, the National Centre for Contemporary Arts (NCCA) in Moscow, and elsewhere. His works have been included in EVN Collection in Austria as well as in the collections of Money Museum of the Bank of Lithuania and the Contemporary Art Centre Sculpture Yard in Vilnius.