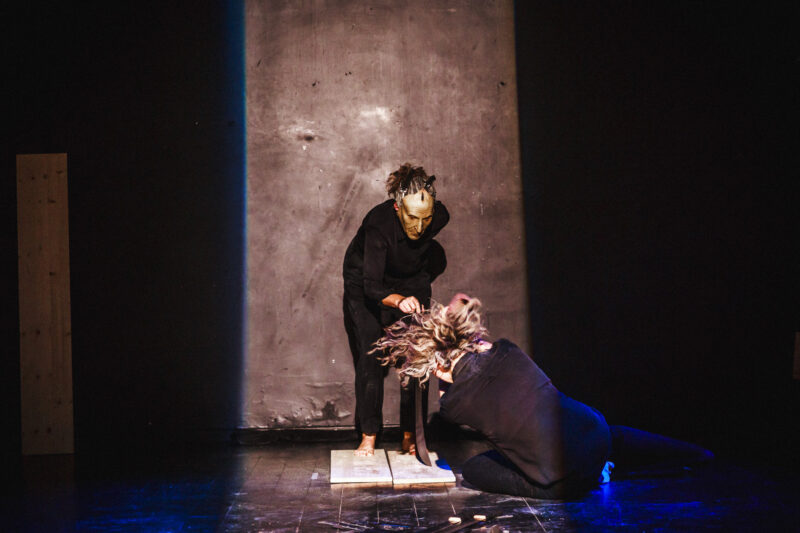 The directors and actors Greta Gudelytė (b. 1986) and Eglė Kazickaitė (b. 1988) studied drama directing at the Faculty of Arts of Klaipėda University. Gudelytė obtained her master’s degree in 2012, and Kazickaitė in 2014. In 2012, the directors co-founded the independent Apeiron Theatre, which stands out on the map of the Lithuanian theatre not only with its unique forms of expression but also with the fact that it has its own home – cosy small premises in the Old Town of Klaipėda.

The directors create the repertoire of the Apeiron Theatre exclusively from original pieces – while they draw inspiration from philosophy, literary works and myths, they always create the texts of the performances themselves. Kazickaitė and Gudelytė work both together and on their own, play in each other’s performances and write plays. Their performances stand out with unique texts that are always based on philosophical postulates, a mindful, complicated worldview and elements of the surreal, the absurd and the social grotesque. These young directors shy away from giving audiences easy entertainment, on the contrary – they seek to make viewers be constantly guessing and trying to put the puzzle of the narrative chain together themselves. The directors have already created almost two dozen performances for the Apeiron Theatre, and their repertoire is being continuously expanded with new works exploring current issues.

The latest performance of the Apeiron Theatre, Edges (Ašmenys, 2019), is described as a ritual action based on the poetry collection Metūgės (1952) by the Lithuanian diaspora poet, prose writer, playwright and actress Birutė Pūkelevičiūtė. In the performance, Gudelytė and Kazickaitė embody the loneliness of young women, highlighting woman’s intimate connection with nature. Those are women who work, suffer, rejoice, fear, give birth, bury their dead, and whose strength comes from themselves. The stage action directed by Greta Gudelytė is a constant search for self, authentic being and the meaning of life.